I am back from a short, last-minute trip to southwestern United States (Arizona, Nevada and California). While I was vowed by Las Vegas and amazed by the Grand Canyon, my bronze tan is a constant reminder of how much time I spent on beaches in California. Having researched a list of top 10 beaches in California last year, it was a shame I could only hit up three, but that’s definitely better than none. Here are the photo highlights from gorgeous days spent basking in the California sun:

The Santa Monica Pier is undoubtedly one of the most iconic ones in California. I originally just wanted to go there to snap a picture or two of the famous roller coaster and ferris wheel. However, I was seriously distracted by the Pacific, spending hours battling the waves and putting my new waterproof camera to use. I was immensely jealous of surfers who were riding the majestic waves and made a note to self: add “learn to surf” on bucket list. 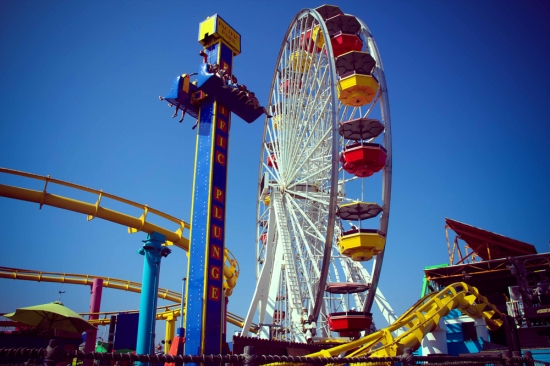 The biggest highlight of Santa Cruz is probably the boardwalk and amusement park dating back to 1907. It offers an exciting line up of roller coasters, games and food vendors, with a stunning view of the ocean in the background.

The water of the beach was freeezing. My local friend had warned me that the Santa Cruz beach would not be swimmable, but my pompous response was, “I am from Canada, eh!”

It was too cold. BUT… had it been a warmer day, I would have been all up in that water, freezing my brains off.

The Monterey County area has 99 miles of spectacular coastline with waves, cliffs, pebble and white sand beaches in some parts. We drove along the 17 Mile Drive and stopped at some of these gorgeous beaches (and gawked at the ritzy villas and bungalows on the way). The swooshing of the gigantic waves mixed with the salty breeze lends a classic calmness to this place, where it’s impossible for any photographer to keep their camera down.