I love a good city break. Few things get me as excited as the idea of eating good food in a new setting. Living in London opens the door for so many exciting weekend trips, but my new favourite city break happens to be on the other side of the hemisphere.

I went to Hong Kong last month to visit my childhood best friend who has now started calling this vibrant city her home. 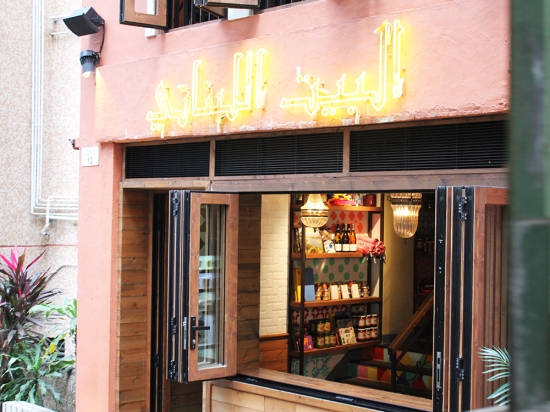 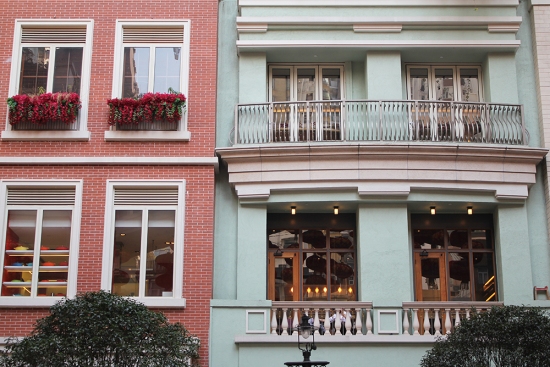 “How do you like living in Hong Kong?” I asked J when I got there.

“I absolutely love it,” she replied empathically. And I spent the next four days seeing first-hand why she was so enthusiastic about Hong Kong.

Pardon me for the cliche, but Hong Kong is the best of both worlds: you can experience the night lights, busy streets, sounds and smells of the Chinese culture, with the option of escaping it all in minutes to go have drinks on roof gardens of skyscrapers.

Hong Kong can be roughly divided between the Centre Island and Kowloon, the latter lovingly known as “the dark side”. J lives in Kowloon, with a quick connection to Hong Kong island. So her place was a perfect launchpad for exploring both sides of town. 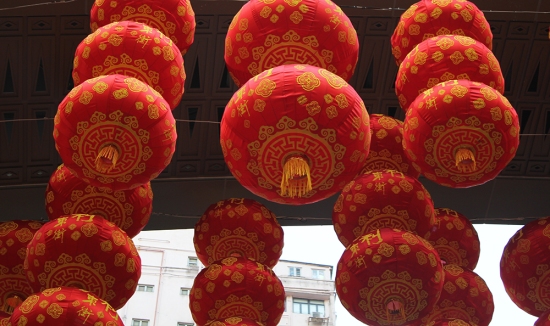 On the south side of the Victoria Harbour, you have competitive skyscrapers – each taller and shinier than the other. World-class bars and restaurants dotted between banking headquarters, Centre Island is what expat dreams are made of. Hong Kong island is hilly and steep, the highest point being the Victoria Peak, a tourist hotspot for panoramic views of Hong Kong (or whatever you can see of it through the fog). 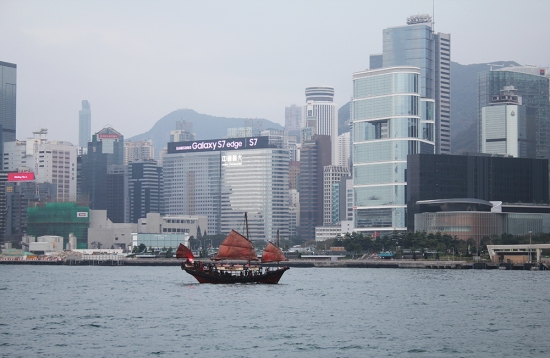 On the other side, you have armies of apartment buildings, trying to house most of the seven million people that live in Hong Kong. It’s here you find your traditional bakeries and Michelin-star dim sum restaurants. The Kowloon peninsula is divided into exciting districts: Tsim Sha Tsui (TST) is the tourist hub with many of Hong Kong’s museums, and Mong Kok (the busiest district in the world as declared by the Guinness World Records) is one of the major shopping areas.

But if you go to Hong Kong for one thing, it should be the food. We ate and drank at so many fun places during my visit, that I’ve succumbed to making a good old guide. I don’t claim to have even scratched the surface of what Hong Kong has to offer in terms of dining and drinking, but these were my favourites:

RESTAURANTS
Qi – Nine Dragons: the TST location offers a magnificent view of the Victoria Harbour (there’s another location in Wan Chai as well). For a Michelin-star restaurant, it isn’t the easiest to find. It’s located on the 28th floor on a nondescript building. But the food was great, and so spicy that I still haven’t regained my sense of taste. Disclosure: I’m not very good with spice.

One Dim Sum: one of the cheapest Michelin star restaurants in the world, this place works pretty efficiently for how busy it is. You put your name down, decide on what you want while you wait, share a table with strangers and chow down. Here comes a controversial opinion: I didn’t think it was the best dim sum I’ve ever had, contrary to other reviews online. It’s a pretty special experience though, so you should definitely visit.

Sohofama: catering to the conscious eaters on Hong Kong island, Sohofama serves local Chinese comfort food. Wooden furniture under fairy lights adds to the feel-good aesthetic of this place. Most ingredients at this restaurant are locally sourced and simply prepared. We liked all the dishes we ordered; in fact, we got a second round of the dumplings.

Yardbird: Go early if you don’t fancy an hour-long wait in this trendy izakaya-style eatery. The dining experience here is simple: good food, good service, good cocktails. It’s very New York or San Francisco. While the aesthetic may be familiar, the food is quite unique. Their grilled chicken wings hit the spot for me. And their KFC – Korean fried cauliflower – deserves a standing ovation.

Aberdeen Street Social: I will climb mountains for a good Jason Atherton restaurant, which isn’t far from the steep uphill trek out of Central district to get to Aberdeen Street Social. Once you’re there though, it’s happy days. Attentive service, interesting menu, great food – all in a artsy dining room which looks like a loft straight out of New York City.

Ham & Sherry: Even if you didn’t intend on going inside this restaurant, the eye-catching tiles of Ham & Sherry will convince you otherwise. Doubling as a jamon bar and sherry bar, this tapas restaurant does both very well. Lots of meat-free treats for that special vegetarian in your life as well. 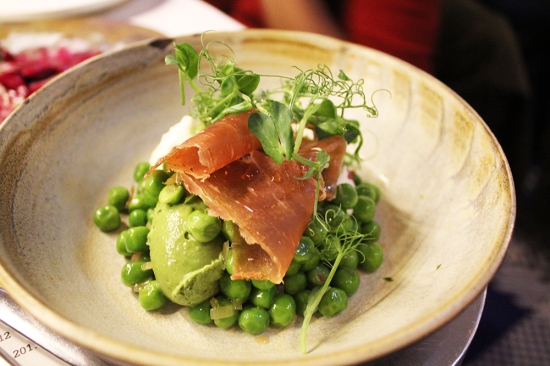 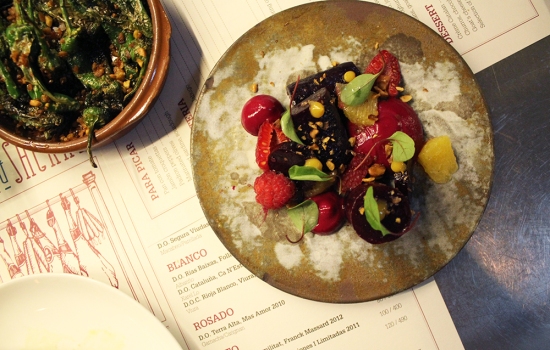 BARS
Quinary: A cross between a cocktail bar and a laboratory, Quinary plays with perception and flavour to put an experiential glass (or jar) in front of you. Given how experimental this place is, I was surprised to see how packed it was (…both nights we went). Their Earl Grey Caviar Martini is the foamy signature drink everyone is sipping on, but I was personally a big fan of their whiskey cocktails.

J.Boroski: Hidden in a nook of central Hong Kong, this exclusive cocktail bar has no menu. Grab a comfortable seat at the bar, and get talking. The long bar runs the entire length of the room, with mini-spotlights highlighting each bartender’s handiwork. It’s a good idea to email the bar to request an invite, but if you’re lucky, you can also just stride right in (after you find it).

Ping Pong 129 Gintoneria: An old ping pong hall on a remote street of Sai Ying Pun (which, I’m told, is well on its way to becoming the Shoreditch of Hong Kong) has been turned into a trendy gin bar. The entire decor of this living room-esque space is a nod to local designers and artists. Most gin lovers will be blown away by the selection here, but even us Londoners (who are spoiled when it comes to gin) gave it an approving nod.

Back Bar: Hidden behind Ham & Sherry restaurant is Back Bar – which is apparently popular among Hong Kong’s hospitality crowd. Cocktail names are punny film titles and the drinks list is a parody of movie posters. For example, I had Mission Ginpossible and Indian Jones.

Ophelia: You’re going to want to go this bar for the concept, maybe not so much for the drinks. The bar is hidden behind an exotic bird shop and is inspired by old school opium dens. Expect plush decor, peacock motifs and thinly-clad waitresses. I’ve heard it’s quite the place to be on a weekend, so to fully appreciate the setting, maybe head here during the week.

The Iron Fairies: This bar is the handiwork of the folks behind Ophelia and J.Boroski. This is one of those bars you have to see in person to fully appreciate the imaginative concept. Vials of fairy dust hang from the ceiling, and there are, literally, a ton of iron fairies spread around this space. Amazing cocktails too.

COFFEE SHOPS
You’re going to need some coffee the morning after that cocktail tour 👆. I’ll keep this one shorter and to-the-point:

Omotesando Koffee: One of the most beautiful coffee shops I’ve ever been to (and i’ve been to many). The picture below doesn’t quite do it justice.

N1 Coffee & Co: who said the dark side doesn’t have good coffee shops? 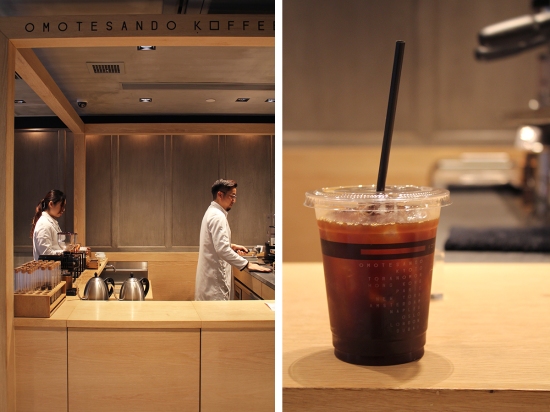 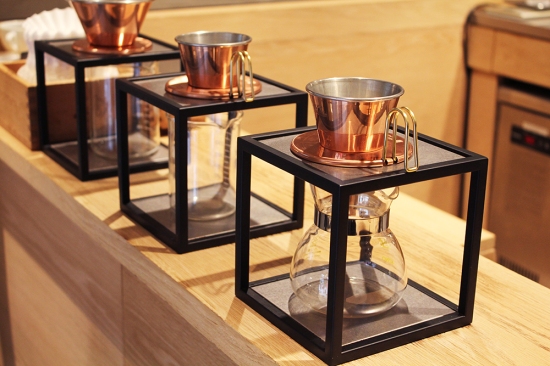 The fact that this is the longest blog post I’ve written in years (if not ever!) should tell you how excited I am about Hong Kong. I’m envious of everyone who gets to call it home for a few years (looking at you, J!) and thrilled for anyone who’s planning a trip there soon.

Godt Nytår - and happy end-of-isolation to me 🥳
Read 50 books in 2021 - motivated by the @goodreads community and its #readingchallenge
Matera is straight outta your favourite fantasy epic. This beguiling cave city was one of the coolest places we saw on our trip
32🍹
Sun seekers in Monopoli ☀️
Ciao Puglia
Loading Comments...
%d bloggers like this: